In order for a park to be named Robitaille Park and located on the ancestral family land, a number of people had to be involved. The person who took on the major responsibility for making this dream a reality was none other than our first president, René from Quebec. Here is a brief history of the park, as told by René:

A long time ago, my father showed me this old house, located at the end of a small road leading to Holy Family Road, and said that "this was the home of our Robitaille ancestors." Once we formed the Association, I tried to find this "old house at the end of the road." I found it in the middle of a new residential development. I went to the developer's office where I saw on the wall, the development plan for the project. It had, in the centre, a space colored green. I realized that this was the site for a proposed park, because the City of Sainte-Foy requires that developers set aside 10% of a property being developed for the city for development as a park. This also confirmed what Ovila Robitaille had told us earlier: that a park had been planned in the neighborhood. So, I said to myself:

This park should obviously be called Robitaille Park since it is located on the ancestral property of the Robitailles.

I undertook an approach to Mr. Serge Forest, Director of Municipal Services, and with City Councilor Guy Filllion who told me quite simply to submit a written request to the city.

The request was made and, finally, on August 7, 1989 the City of Sainte-Foy in Resolution 39727, moved by Mr. Guy Fillion and seconded by Mr. Gaston Paradis unanimously approved the following motion:

That the park located in Area 3 of Gaudardville be named Robitaille Park. …

it was on this land, therefore, that we unveiled our monument on August 1, 1993. 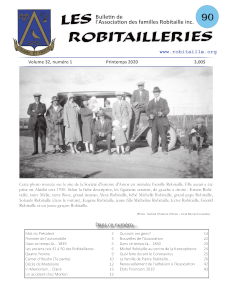